Disney Springs just keeps getting sweeter and sweeter, and with the opening of Sprinkles Cupcakes last spring this Disney hot spot can’t be beat.  If you haven’t heard of Sprinkles cupcakes you may just be living under a rock.  Sprinkles is home to the world’s first cupcake ATM and has grown to 20 store’s worldwide.  AND is….

Sprinkles Cupcakes serves only the finest ingredients; meaning no artificial flavors or preservatives are used.   Your taste buds are guaranteed freshness and extra sweet baked into every cupcake.  Between the ATM and the store they bake and frost nearly 2,000 cupcakes a day! 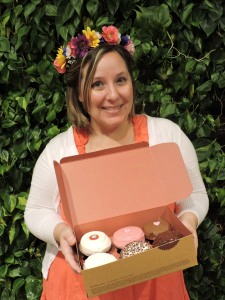 With this much natural sugar shock going on I had to give in to my craving.  I met up with Jodi, the General Manager at Sprinkles at Disney Springs to get the inside scoop and learn some super cool facts about CUPCAKES!

Jodi has worked at the Sprinkles in LA, Beverly Hills, and Las Vegas  before coming to Florida.  She has been with the Disney Springs bakery since it opened May 2016.  So of course she has seen and experienced a lot in the cupcake world.  When asked what makes Sprinkl

es so different from other bakeries, she replied, “Sprinkles is like a ride. Because you come in and see the cupcakes being made and be a part of the process itself.”  Guests can view cupcakes being frosted through out the day up until closing.  Using a unique frosting technique called the Sprinkles swirl, cupcakes are frosted  all around and finished with a final swirl.

Almost everything is made in-house. For example, the cream cheese whipped cream featured in the Red Velvet Mocha is made in several batches throughout the day.  **Fun Fact** Red velvet is their most popular and signature flavor.  And did you know you can say anything with cupcakes?  Have any message or hashtag spelled out on cupcakes! 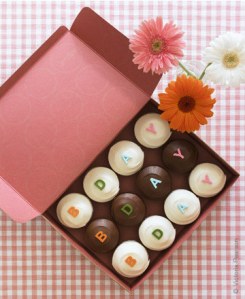 “We’ve had message boxes that ask “Will you marry me?  My favorite messages are those for weddings or ones with bridal shower hashtags.” (Jodi, 2017)  Sharing happy messages with special humans is just too sweet with Sprinkles Cupcakes. This is by far the most joyful cupcake I have ever seen.   They are also the best cupcake I have ever tasted.  Sprinkle’s cupcakes are so moist that they melt in your mouth and they go great with a sweet cup of coffee.  My favorite combination is a Red Velvet Cupcake and the Red Velvet Mocha.  Other specialty drinks are available.

Get your cupcake on at Sprinkles Disney Springs between 10am and midnight Monday-Sunday!  For after hours treats and sweets check out the Cupcake ATM located just outside the bakery.

While there is only one Cupcake ATM currently at Disney Springs, Jodi hinted towards the franchise’s expansion and their hopes to add a second soon.

My visit to Sprinkles is just a few months shy of their one year anniversary.  I can’t wait to find out how they will celebrate!  Til then join the Sprinkles Perks program to earn free cupcakes!!!  Thank you, Jodi for the opportunity to experience Sprinkles and the world’s greatest cupcake with my family!